HIZGI is a Japanese illustrator. Her work tends to project herself deeply into the character named HIZGI GIRL with ‘fetishes’ and ‘kawaii’ by her originality techniques.

Her illustrations are announced on Tumblr daily. It is known abroad as well as in Japan and there are many fans of HIZGI's views of the world. In recent years, mainly in the United States, it has become popular.

HIZGI has held exhibitions in galleries worldwide, ‘KIBUN’ in Berlin, 2011, ‘Re:SPES-LaB’ in Tokyo, 2012, and ‘GG BOT FESTIVAL’ in Amsterdam, 2012. Her works are highly evaluated even in domestic or foreign countries. Her works include a published art book ’mog rag vol.4’, and a first solo show ‘Hakano Shita’, held at SPES-LAB in Ebisu, 2013. Since then, her activities were extended and she has joined ‘BCTION’ in 2014. At the same year, she designed the stamps for the camera application ‘Pop Cam’. 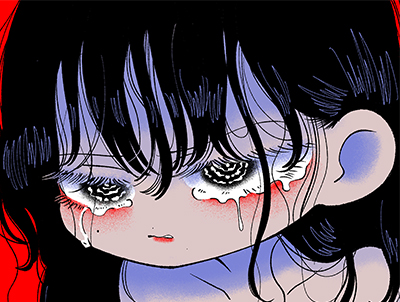 Tell me it's not wrong